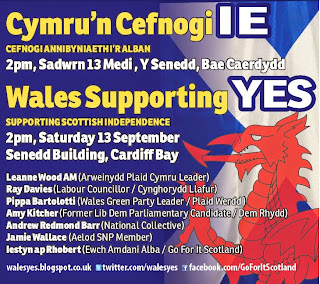 In exactly a week’s time, Just days before the Scottish independence referendum, people from all over Wales – from a range of political views – will come together in Cardiff to send voters a clear message: Go for it Scotland!

Organised by ‘Wales Supporting YES – Go For It Scotland’ the event will be a grassroots cross-party and no-party event to support the aspirations of the Scottish people for self-determination and independence. Speakers will include: Leanne Wood, Leader of Plaid Cymru; Pippa Bartolotti, Leader of the Green Party in Wales; Labour Councillor Ray Davies from Caerphilly County Borough Council; and Amy Kitcher, Former Lib Dem Parliamentary Candidate.

Also speaking will be two Scottish voices, SNP member Jamie Wallace and founding member of the National Collective, Andrew Redmond Barr; As well as other community representatives from Wales and messages of support from grass-roots campaigners and people in Scotland. There will also be live entertainment at the event, and the atmosphere will be of a celebratory and positive nature.

The last few weeks has seen a surge of support in Scotland for independence, YouGov's latest poll on Scottish independence shows the 'no' lead has collapsed to just six points, with the Yes poll rising to 47%, closing the gap substantially on the no vote, presently at 53%.

Iestyn ap Rhobert, of Wales Supporting YES, said: “The people of Scotland have the opportunity of a lifetime on 18th September. We know that most of the mainstream media and other establishment voices are using scare tactics to put pressure on them to vote no. Come and join us on Saturday to send a more positive message from Wales: Go for it Scotland!”

“We have great speakers coming on Saturday, from a range of political parties in Wales. We’re also very glad to be able to welcome some activists from Scotland to share their experiences in Jamie Wallace a member of the SNP and Andrew Redmond Barr from the National Collective”.

Quotes by a speakers

Leanne Wood, leader of Plaid Cymru, said: “Being independent is a normal state for any nation. Scotland’s referendum provides an opportunity for people there to build a fairer society based on equality. A YES vote can inspire people in Wales and in other parts of these islands to do more for ourselves and to do our politics differently. Scotland shows us there is an alternative.”

Pippa Bartolotti, leader of the Green Party in Wales said: “A yes vote will bring decision making closer to the people of Scotland – and that’s very Green!”

Labour Councillor Ray Davies said: “An independent Scotland is a giant step towards a nuclear free world. A victory for Scottish independence will be an inspiration for Wales… and all those who thirst for freedom and the right to control their own lives.”

Andrew Barr from the National Collective said: “This rally will be a powerful demonstration to the world that the ideas and aspirations of the people, both in Scotland and elsewhere in these islands, can no longer be afforded to us by the Westminster system. This will undoubtedly be a beautiful gesture to Scotland, but I also hope it will mark the start of a more vocal, more confident movement in Wales.”
Posted by Wales Yes at 23:30