SNP Member, and Gaelic speaker Jamie Wallace, will be speaking at our event. Diolch Jamie. 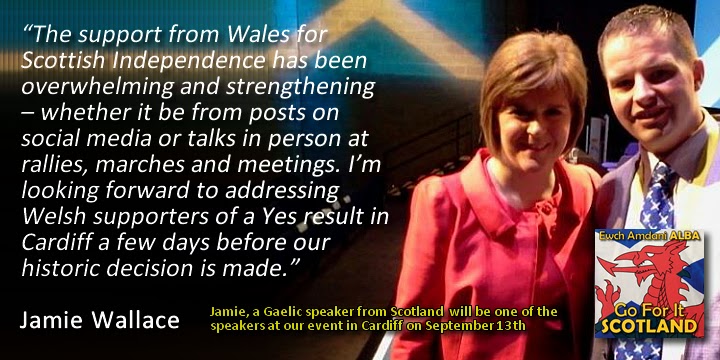 Jamie Wallace is the co-founder of Comann nan Oileanach airson Neo-Eisimeileachd na h-Alba or CONEA for short. It's an association based on the Isle of Skye for all students wanting Scottish Independence and it was a pre-curser to Yes Alba who now act as an umbrella group for all the other Gaelic independence initiatives. He has spoken at several events including Yes Skye, Raasay and Lochalsch rally.

Creator of Yesmahagow which was inspired by a Sunday Herald article over a year ago and takes an often satirical take on Indy affairs whilst attempting to bring a local approach to the debate. The Sunday Herald today, of course, is the only newspaper to come out and publically support Scottish Independence. It was also created at a time when there was no official desire for a village level approach; today there are Yes campaigns from every village and town in Scotland.

Jamie has been spending most of his time coordinating Gaelic activities in his home area of Clydesdale after recently helping to establish a new organising committee and has been busy yessing – helping to man the Yes Information Hub, deliver leaflets and newspapers and help with the canvassing of voters.

Over the past couple of months, Jamie has become the Gaelic columnist for the SNP's Independence Magazine. He has been a member of the West Clydesdale branch of the SNP since 2006 and is now the branch conference delegate. He says:

“I joined because I want to see Scotland stand on her own two feet in this world, I want to see the back of Trident and WMDs from Scotland and I want to see an end to poverty on our doorsteps. I now also hope to influence the SNP membership that Gaelic on the whole is a great thing for Scotland. My ultimate goal is to mimic Wales and have ALBA across the rugby or / and football tops of our national teams, and to see more development with Shinty as a national sport.”

Outside his campaigning for Yes, Jamie likes to take an interest in Gaelic language activities including its planning and development. He is a final year honours student of Gàidhlig at the University of Glasgow and is looking forward to being able to work in an independent Scotland to develop and advance the cultural, heritage and language aims of the nation.