Blog by one of the organisers, Branwen Alaw Evans

Blog by one of the organisers, Branwen Alaw Evans, from Llanelli
alawevans@gmail.com 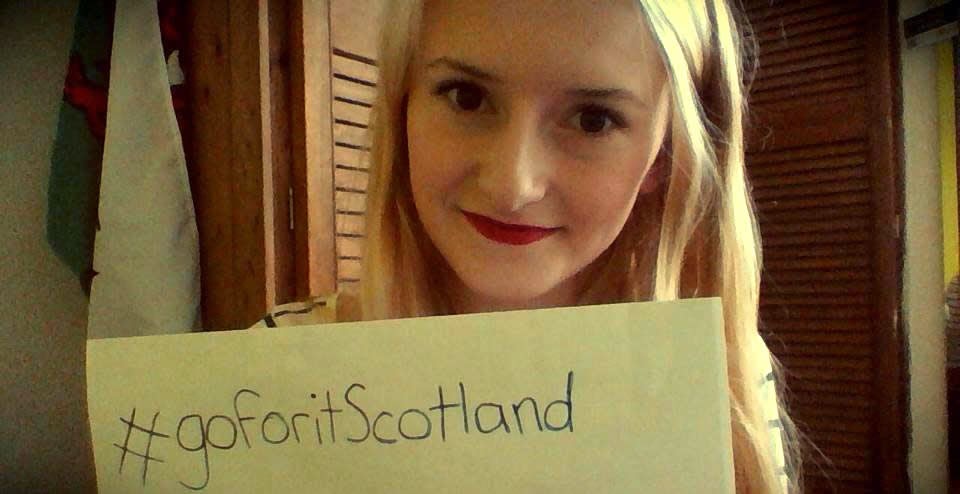 The No camp say that an independent Scotland is too risky and its economy will be volatile. To me I can’t think of anything more risky than staying with the Tories and their excessive cuts. The risk of getting a UKIP/Tory coalition voting to quit the EU. The risk of even more cuts, with even Labour saying they will stick to the Tories’ austerity measures. I can’t see how the risk to a country as wealthy as Scotland would be greater if it was to run it’s own affairs.

This is the first time in centuries that the people of Scotland have the opportunity to create the kind of country they want, through a written constitution and through electing the politicians they vote for. A blank slate wiped clean to paint whatever future they want. In many areas the Scots have already chosen their future. The population has overwhelmingly rejected the Conservatives, poll tax, bedroom tax and nuclear submarines. With a Yes vote on the 18th they will be able to implement these decisions for good.

This won’t be a goodbye to Scotland, it will be a goodbye to colonialism and empire. This will be a massive ‘Hello’ to a new and more prosperous Scotland on the world stage. With whom they can build new trades and friendship with the rest of our isles based on equality and a shared past.

For me it’s about democracy and accountability. Here in Wales there is easy access to our politicians in Cardiff, you can attend public meetings / surgeries, email or send them a tweet. I want those politicians based in Cardiff to have the powers so that they are truly accountable to the people of Wales. There isn’t the same accountability in Westminster. It’s a huge establishment miles away with politicians who wouldn’t give any of us the time of day. So that’s what I want, power closer to the people where politicans are accountable and represent our views. That to me is democracy.
Posted by Bonheddwr at 09:46